Do you know the best secret for perfect, sweet corn on the cob? This simple, foolproof recipe will give you the tastiest boiled corn on the cob every time!

I don’t know many people who can resist to a piece of bright yellow, juicy, sweet corn on the cob. That’s why you can find it in many countries throughout the world, prepared in different ways depending on the place.

Greek street corn is called “kalampoki psito” and it’s almost always grilled over charcoals and served plain, only with a generous pinch of salt. It’s especially popular during late summer and it’s also a perfect snack for the beach, especially when you pair it with some of these juicy Greek fried meatballs.

Mexican street corn is called “elote” and it is served with cheese (cotija), sour cream, mayonnaise and lots of different spices.

In American cuisine corn on the cob is usually served as a side dish next to a protein (like this honey-balsamic glazed chicken) and some veggies.

This recipe is probably one of the simplest corn recipes because all you have to do is pick the best corn you can find, shuck it, and then boil it in a large pot.

How do you pick the best ears of corn you ask?

Choose the ears of corn that have bright green husks which are wrapped tightly against the corn and are still slightly damp. Avoid the ones that seem dry, or those that are starting to turn yellow.

The guys at thekitchn tried 8 different ways for cooking corn on the cob and according to them the best one is grilling it with the husks on. Boiling the corn in plain salted water came second. However, because boiling is so much easier and simpler, it still remains my favorite way of cooking corn on the cob.

This is a foolproof recipe for corn on the cob.

The short answer is that you really can’t mess this up. The recipe requires that you put the corn into the boiling water and turn off the heat once the water starts to boil again. What this does is to reduce the danger of overcooking the corn.

Even if you forget it, you still have 10-20 minutes leeway before the corn starts to get tough. Moreover, the acidity from the lemon juice prevents it from becoming mushy while the sugar and the salt intensify the taste (don’t worry about the sugar, most of it remains on the water and not on the corn).

There are also recipes where you boil the corn in milk. Boiling corn in milk gives it a sweeter flavor but I’m always hesitant of using milk because it just seems like a waste of ingredients. I prefer adding just a bit of sugar because it brings out even more sweetness.

How to make corn on the cob

For this recipe you only need 4 ingredients (I don’t count the water) and about 20 minutes. Follow these steps for the best, juicy, sweet corn:

How long do you have to boil an ear of corn?

As a general rule, once the corn will be inside the pot with the boiling water it will be cooked in about 5-8 minutes. When you cook vegetables with natural sugars (like peas or corn) the sugars turn into starch. That’s why we try to shorten the cooking time, because we want to preserve these sugars which give the food its sweet taste. The corn will be cooked even after 5 minutes but it may be firmer. If you prefer it more tender try cooking it for 7-10 minutes. Similarly, in my Greek pea and potato stew I also cook the peas just for 1-2 minutes to preserve their great taste.

Can you over boil corn?

Overcooking is the most common reason for tough corn. Once corn is overcooked, there’s not much you can do. However, what you can do is reduce the chances of that happening by applying a simple trick: heat the water to a rolling boil, add the corn and turn off the heat. Turning off the heat will ensure that even if you forget it for a few minutes more, it will still be sweet and tender. It’s also a great way to keep it warm for some extra time.

Do you add salt when boiling corn?

I always add some salt in the cooking water and additional salt just before serving the corn.

Seasoning for corn on the cob

A generous sprinkling of salt is all you really need. If you want more, other seasonings you can use are:

What can you put on corn on the cob instead of butter?

When the corn is extra fresh and warm from the pot, I find it perfect even without butter (hey, don’t judge). Other options are mayonnaise, cream cheese or sour cream and some of the seasonings mentioned above.

How long does corn on the cob last in the fridge?

Raw corn on the cob will keep for about 3 days stored in the fridge. I prefer to leave the husks on (though you can also remove them), wrap each ear with a piece of kitchen paper and then store them in a plastic bag. Kitchen paper will absorb extra moisture which may cause the corn to go bad faster. 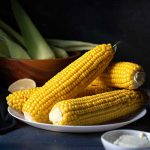 If you want to boil more ears of corn make sure you have a large enough pot. If you use a small pot and a lot of corn, the corn will bring down the water temperature and it will need more time to cook.

Leftovers can be stored in an airtight container in the refrigerator for up to 4 days.