This easy Greek rabbit stew recipe in red wine and tomato sauce is a popular dish especially in the region of Crete. If you’re a hunter, you can also use hare.

Cretan people LOVE rabbit. For me, this recipe for rabbit stew is a hearty, comfort food which brings so many childhood memories. I distinctively remember myself jumping up and down from pure joy every time my mom used to ask us if we wanted rabbit stew for dinner or “kounelaki kokkinisto” as it’s called in Greek – the only major competitor of rabbit was – and still is – Pastitsio. This Cretan traditional dish is probably best enjoyed during winter because it is so warm and cozy, but I make it in every chance I get, no matter the season. I also happen to like it best when served with fried potatoes on the side, but for this post and for a lighter meal, I cooked the potatoes in the red sauce. A large dollop of mashed potatoes, pasta, or some rice are also great sides.

How to make rabbit stew

As with most recipes of this kind, you have to start by browning the meat very well. This will add so much more flavor to the final dish because of the caramelization of the proteins. Don’t let it just change color, leave it on the hot surface of your pan until it gets deep brown.

After the meat has browned you can add the onion and the spices. Though it is not necessary, remove the meat from the pot for the onion to cook faster and more evenly.

Add the liquids and bring the pot to a boil. Then reduce the heat to a low simmer and cook covered until the meat is fork tender.

Because rabbit is a very tasty and flavorful meat, the ingredients in this recipe are kept simple and relatively few. A good quality white or rose wine (not expensive, just one you enjoy drinking), one or two bay leaves and a few kernels of allspice are enough to give character to this rabbit stew. The addition of pureed tomatoes gives body to the sauce and offers something delicious you can spoon over your pasta, rice or potatoes.

If you happen to know a hunter, this recipe also works with hare. Hare and rabbit can be cooked the same way since they belong to the same family. The hare usually has tougher meat so it may take longer to cook. 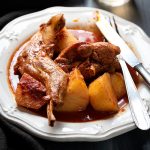 Don’t crowd the pan when browning the meat. Do it in batches if needed.

If you don’t want to use tomato, use one more cup of wine