A traditional recipe for double baked olive oil cookies with almonds. These biscotti are tender, crunchy, delicious, and naturally vegan!

Cretan almond biscotti!!! These are my favorite cookies, and I’ve been waiting for some time now to share this recipe with you! Did you think that biscotti (or cantuccini) are only made in Italy? Of course not! Cretan people have their own recipe for double baked olive oil cookies which, I dare to say, is even tastier than the classic recipe you may know. And as most Cretan traditional recipes, it is unbelievably easy, since it doesn’t require a mixer or other kind of fancy equipment, not to mention a whole lot healthier because it’s made with olive oil instead of butter. All you’ll need to make them is just a bowl and a whisk. And maybe not even a whisk. My grandma used to mix everything with her hand! Additionally, these biscotti are naturally vegan since they contain no eggs or any other animal products. In a way, they are a lot like this olive oil & tahini chocolate cake, but without the chocolate and the tahini 🙂

In Crete, these cookies are called “Kalorizika” which means “fortune cookies” or more accurately “good fortune cookies”. They are made as a treat for special occasions like engagements and weddings to signify the couple’s good fortune and longevity – as I’ve written in a previous post (I think this chicken soup risotto, which is also served at weddings), nuts and grains symbolize prosperity and fertility in Cretan tradition. That’s why almonds, walnuts, and rice play a major role in these kinds of celebrations.

I have to admit that it took me some time to get the recipe just right. I mean, I had my mother’s recipe, which is really delicious, but it wasn’t exactly like the awesome kalorizika you find in some traditional bakeries! But now I am able to tell you that this is the real thing! The recipe contains Raki (also known as tsikoudia or tsipouro), a spirit which comes from byproducts created from the wine making process. After the grapes are pressed, all the pulp, skins and twigs are stored so that they can begin fermenting (as you see, we don’t let anything go to waste!). This pomace, as it’s called, is stored for about six weeks and when ready, it is distilled into Raki. If you’re interested, a few weeks ago I made an olive oil and oregano whole wheat bread with a sourdough starter made from fermented raisins, a procedure similar to the fermentation of pomace but on a much smaller scale!

These cookies, like most biscotti, get double baked so that they dry out and become extra crunchy. This is something that helps them keep for a long time. And I mean a LONG time! In the recipe box, I tell you that they keep well for at least 15 days, but my mother keeps them even for over a month without any problems! The double baking process is very simple. First, you form loaves, cut them up vertically without separating the pieces (just like the pictures show) and bake them as you normally would. When done, you wait for them to cool, separate the cookies into individual biscotti, lay them the one next to the other in the baking pan and bake them for a second time at a lower temperature. The second baking dries them out, making them extra crunchy! If you’d like, you can reserve some and eat them soft without baking them for a second time, but keep in mind that they will become stale after two or three days.

You can use half olive oil and half vegetable oil instead of all olive oil, for a lighter olive oil taste.

Don’t use too much flour! The more you use, the tougher they’ll get!

These biscotti keep really well! Store them at room temperature inside an airtight container for up to 15 days or more!

Some people like to use grounded mastic (about 2 tears) and almond extract (2-3 drops) as additional flavorings, but I usually don’t.

Super important: They are delicious dunked in hot coffee! 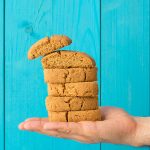 Some people like to use ground mastic (about 2 tears) and almond extract (2-3 drops) as additional flavorings, but I usually don’t.