This is a tall, creamy and velvety chicken pie with a flaky puff pastry crust. 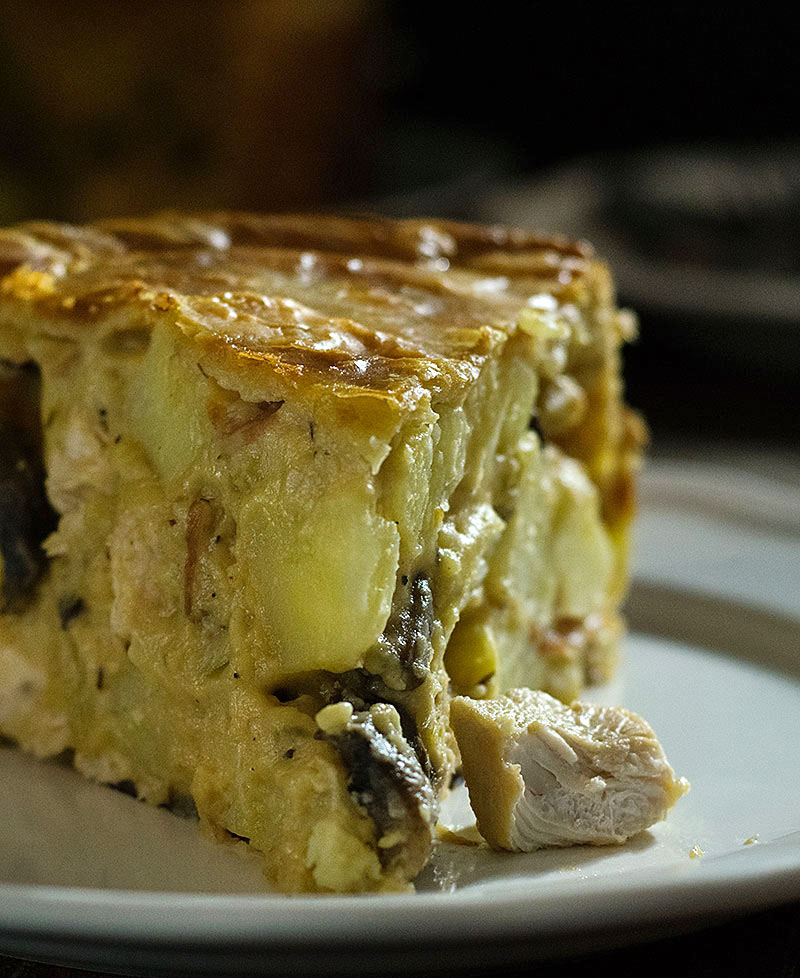 What can I say about this recipe? It has everything I want from a chicken pie. I was actually inspired by a chicken-leek tart that I often make when there’s a special occasion (I don’t know why but somehow, over the years, I have related tarts with more formal events or special dinners). I make this tart using cream and eggs, but for this chicken pie I wanted the flavor without the extra fat from the cream. And every time there’s such a need then, béchamel sauce is the perfect substitute. But again, I almost never stick to the original recipe. For my béchamel sauce I use olive oil. Yes, olive oil not butter.  Some of you may frown, others may become judgmental, but if you try it you’ll agree it’s DELICIOUS! 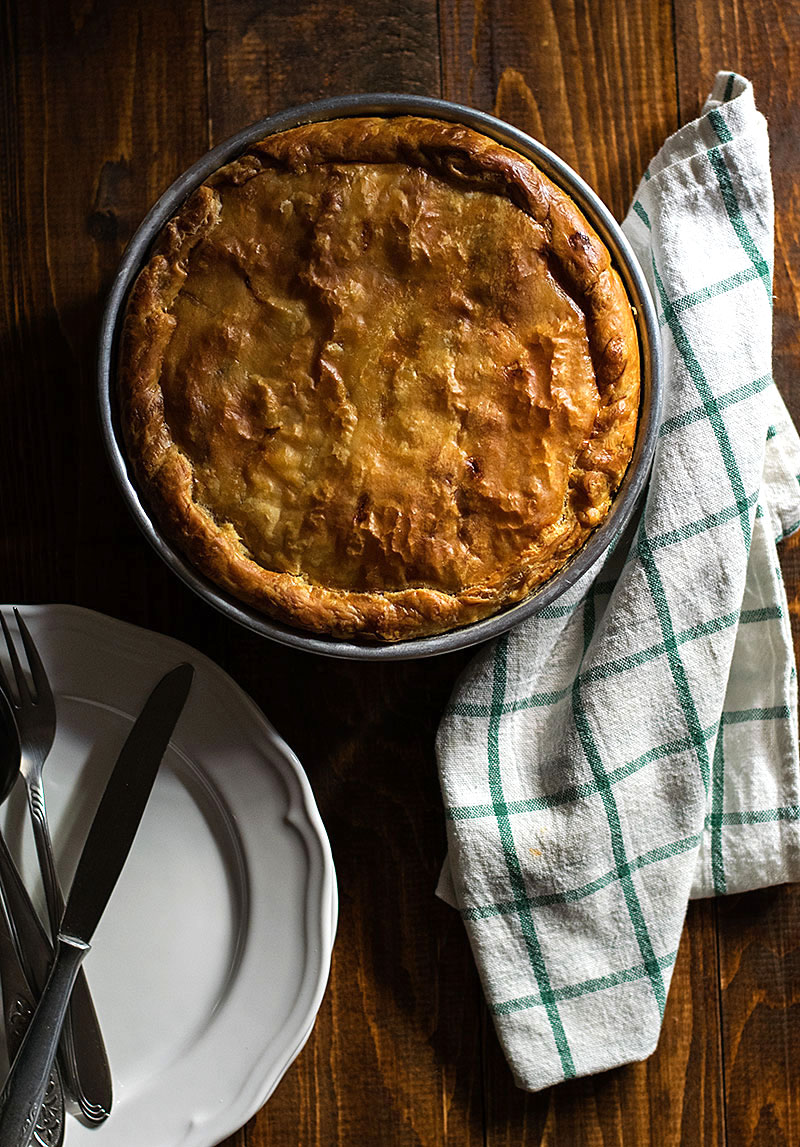 Just make sure you brown the flour with the olive oil very well, until it gets a really nice nutty aroma and the flour-y smell is gone. Then add some cinnamon and nutmeg (always use nutmeg in your béchamel!) for a warm, sweet, oriental scent and afterwards add the milk. You can use low fat milk if you want to further cut down on the fat content and the calories. After some stirring and heating you’ll have a luscious béchamel sauce with roughly half the fat than cream, and way better for this recipe! And the consistency is just perfect! It is velvety and creamy but also thick enough so that you can cut a piece without falling apart (though you’re gonna have to wait to cool down a little). 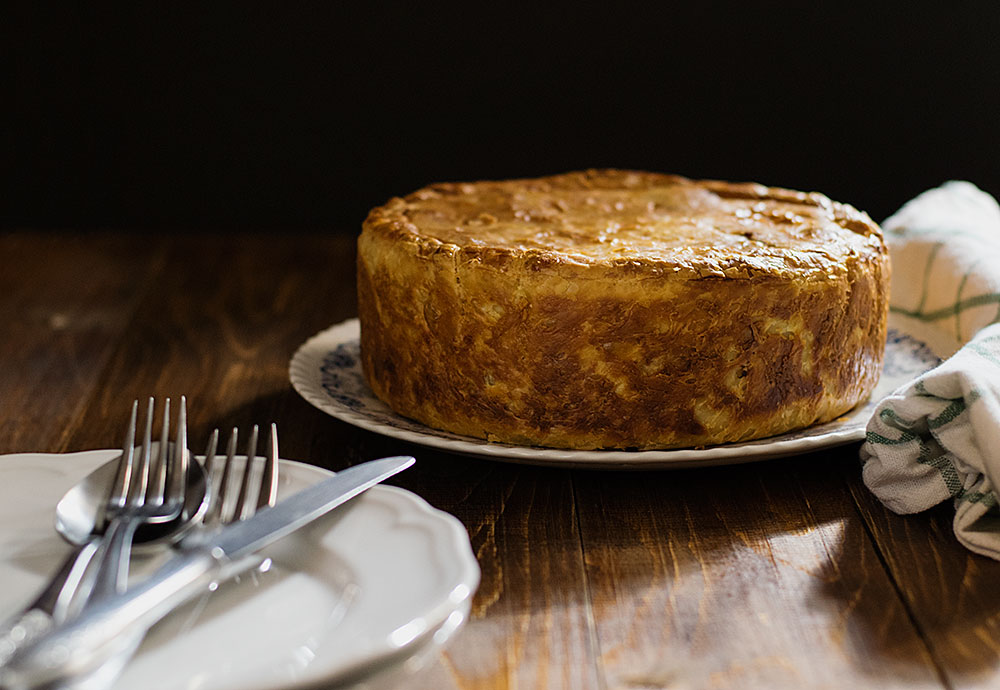 Look at that crust. Will you be able to wait for it to cool? Will the smell let you?

Want to give you another reason to frown? I don’t use peas. It’s not that I don’t like them, it’s just I don’t like them in my chicken pie.  It’s something like this: I’m in front of a freshly baked, warm chicken pie. I take a knife and cut myself a piece. I hear the flaky crust breaking and some steam escaping from inside. The filling is still trembly. I close my eyes and take a bite. At first, I taste the buttery, well browned crust. Then I feel the creamy béchamel and bite a piece of chicken. The leeks and the mushrooms make me sing inside. And then… Oh oh, what’s that? A pea??? (frowned face). I’m back on my feet.
OK, if you feel the need, you can throw in a handful if you like, no one is going to blame you –after all YOU are the boss in your kitchen. 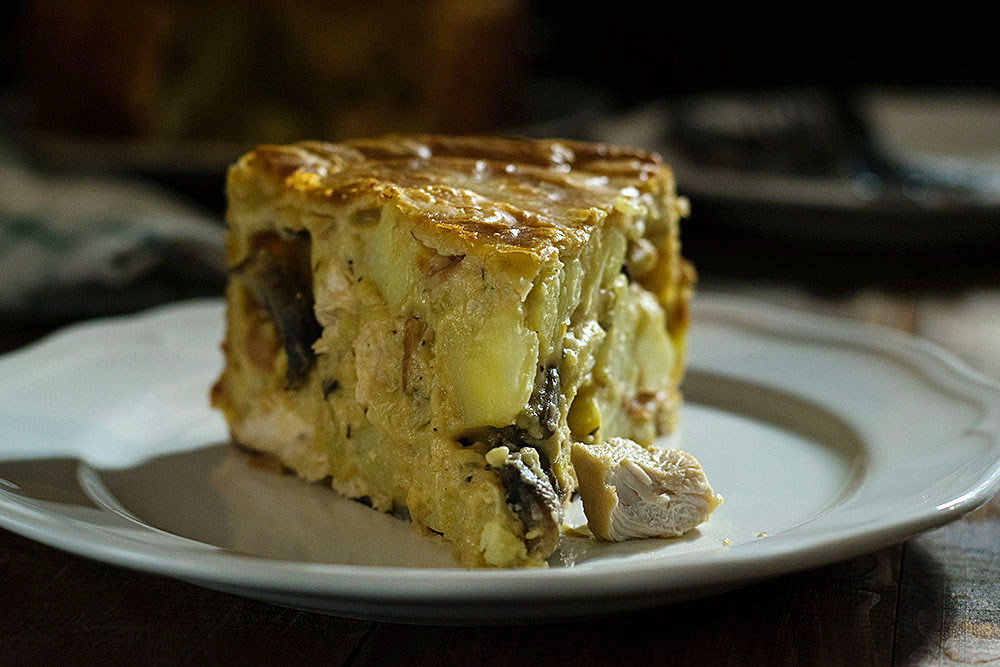 This pie also uses leeks and mushrooms. Leeks give it a nice sweet flavor, while mushrooms lend it an earthiness that goes very well with the chicken and the warm tones of the béchamel sauce. And speaking of mushrooms I have two things to mention.
First, when you cook them, you want to sauté them in a little oil over high heat until they water out. Stir them from time to time until all of their water has evaporated and then stir them some more. Because, when they have lost all of their water, then it’s your chance to brown them properly. So stir those bad boys in the hot pan until your entire kitchen starts to smell like a damp forest.
Secondly, you want to throw in there some thyme. Yes, you do. 🙂 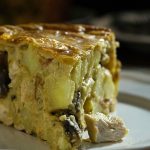 You can boil the chicken, or buy a rotisserie one. I prefer to butterfly two half breasts, pound them to even their thickness and cook them with a tablespoon or two of olive oil in a skillet until browned from each side. In the same skillet, without cleaning it, I then cook the mushrooms and leeks.
If you have any leftover puff pastry, just cut it in strips, sprinkle them with some cheese (or a cinnamon-sugar mixture) and bake them until brown for a tasty, crunchy snack!