A chocolate & vanilla vegan semolina cake with pears cooked in syrup! This is a Greek traditional super moist cake also known as halva! 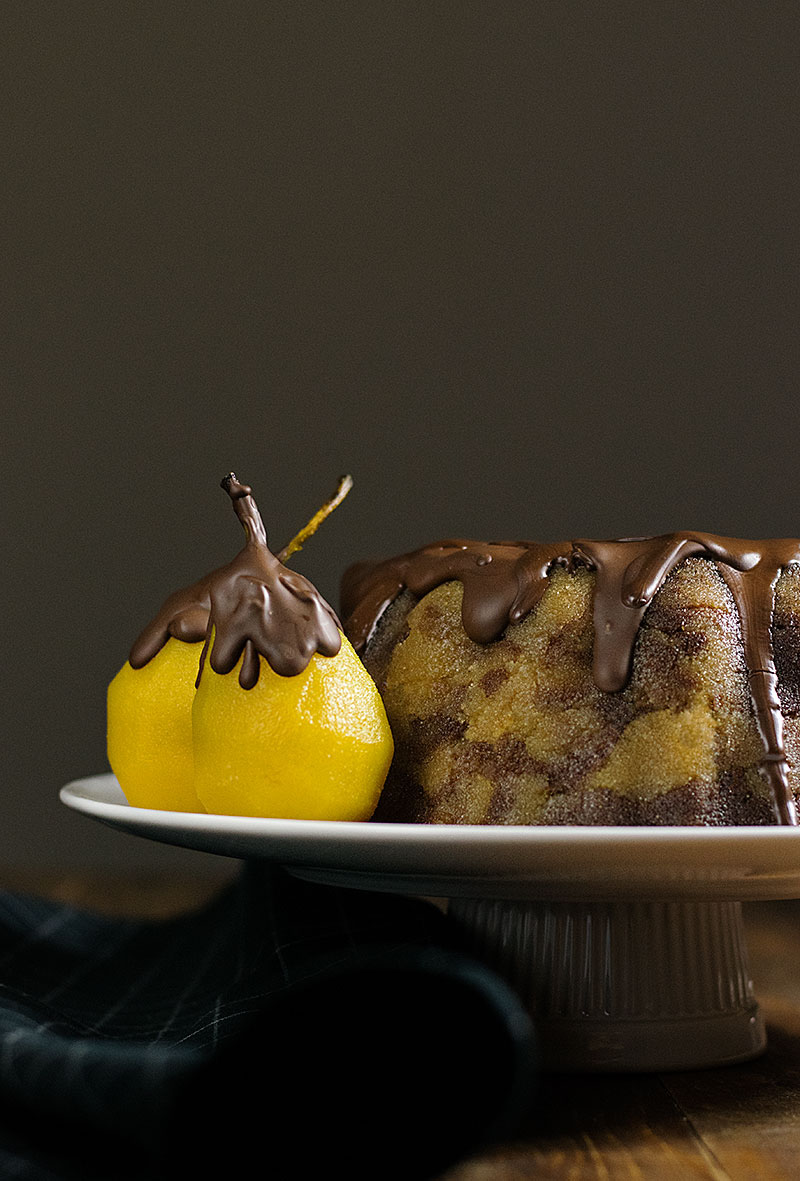 Hello everyone!
Spring is already showing us the first signs of its arrival, the days are getting longer and before we know it, we will be celebrating Easter with lots of chocolate eggs, sweet breads and bunny-shaped foods. In Greece, a lot of people, following the Orthodox tradition, stop eating meat, eggs and dairy for a 40-day period before Easter (lent). You could probably say that they go vegan, though some years ago vegan was an unknown word for most of them! This semolina cake (also called halva) is the most popular dessert they make during this period of fast. OK, maybe not exactly this one, because this recipe includes some chocolate and poached pears! If you want to know the original recipe, check my no bake oriental semolina cake. 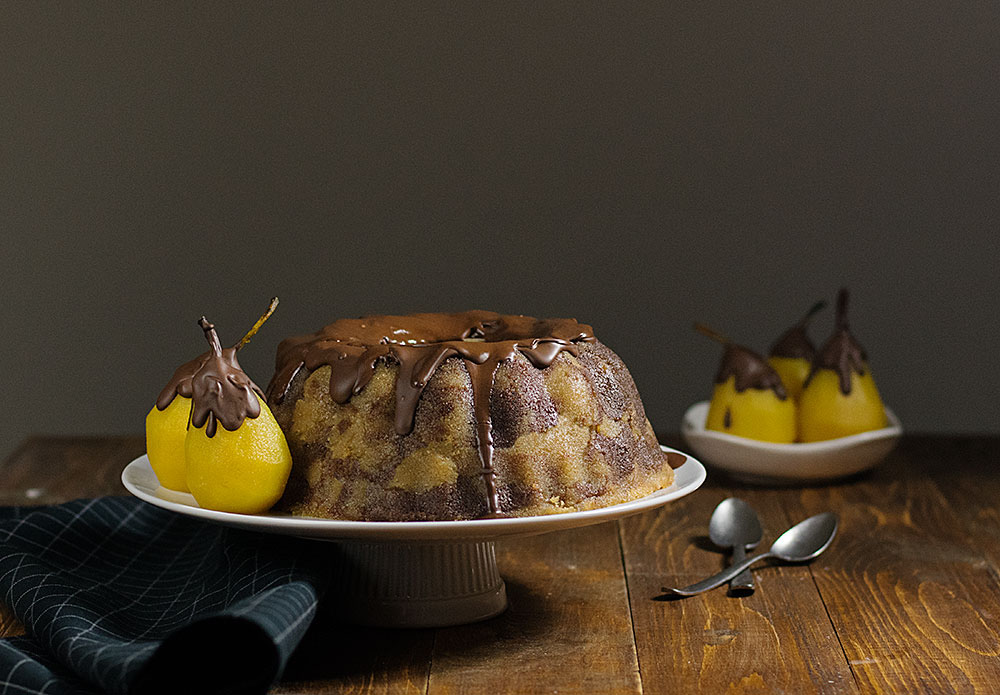 This cake is very simple to make, and requires just a few ingredients. Since it’s consumed during fasting, it’s naturally vegan, meaning it doesn’t contain any eggs, dairy or butter. In Greece, we’re lucky to have plenty of olive groves so olive oil is a bit cheaper than other countries and is almost always used in this halva recipe. Sometimes though, olive oil can have an overpowering taste, and that’s why some people use half olive oil and half another vegetable oil (such as sunflower oil or corn oil). The bottom line is that this recipe works no matter what oil you choose to use! 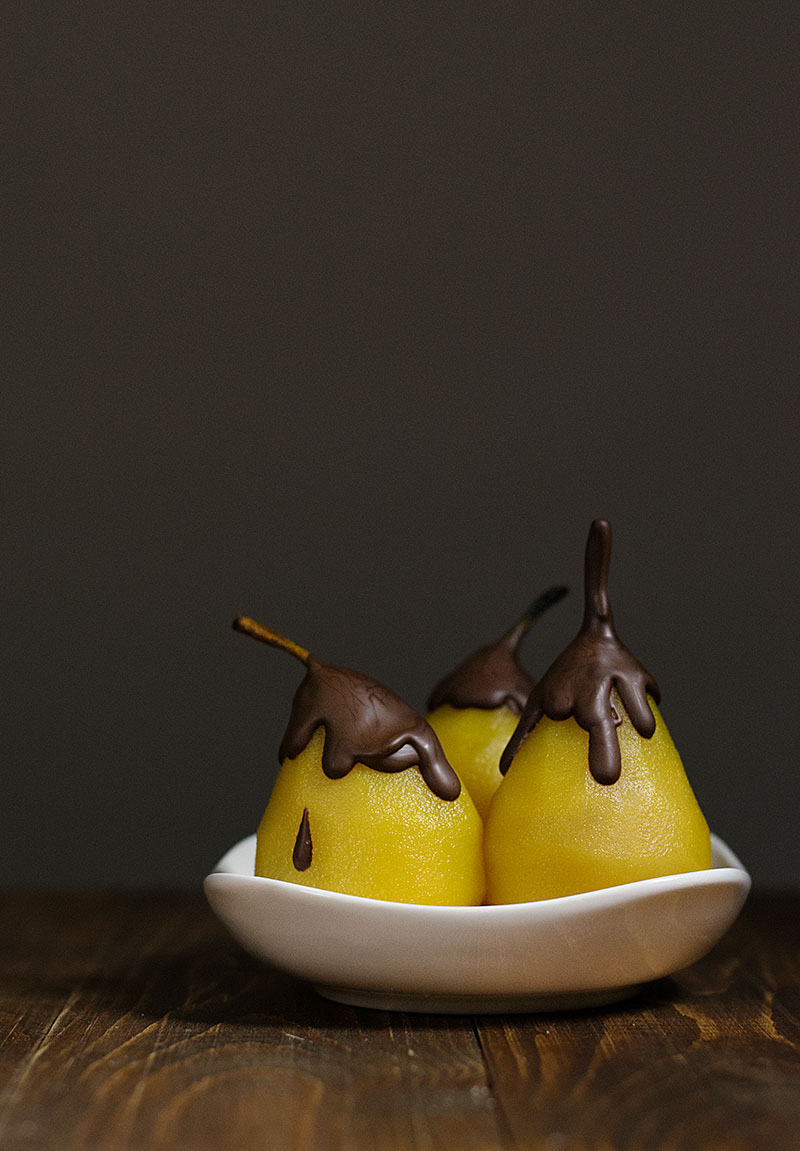 The consistency of the semolina cake (halva) is something between a cake and a pudding. To make it, first you brown the semolina with the oil until it gets a nice deep color and then you add the syrup and stir until all of it is absorbed. At first, the mixture will look like soup, but shortly after it will begin to thicken. Then, all you have to do is divide it, add the chocolate into the one part and then spoon alternately the two mixtures into a silicon mold or a lightly oiled bundt pan and leave it there to cool. 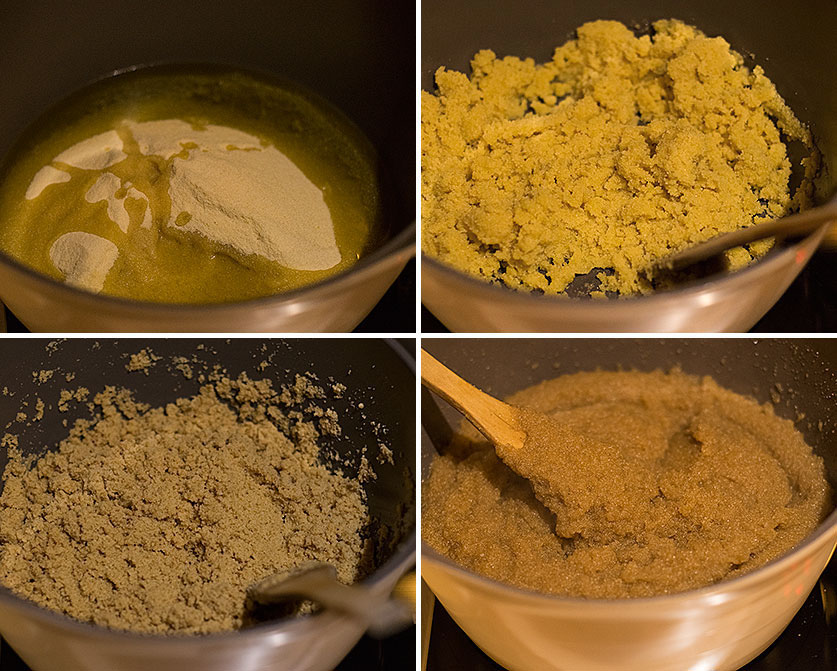 I strongly suggest serving this cake with the poached pears.  Actually, I suggest making them even if you don’t make the cake! Choose some well shaped and firm pears, peel them (try to leave the stems intact – they’re prettier this way) and cook them in some syrup. If you happen to have some saffron or another aromatic to throw into the syrup, even better! And if you feel up to the task, make some olive oil ganache to drizzle it over the fruit.

I love these pears! They may accompany this halva really well, but they are also delicious eaten with some yogurt and granola, some vanilla ice cream and crushed cookies, or even plain with a dusting of cinnamon!  Cut them in half and discard the pits before poaching them, or carefully open a whole through the bottom to scoop the pits out! (I like to be a bit unconventional and leave them in 🙂 ) 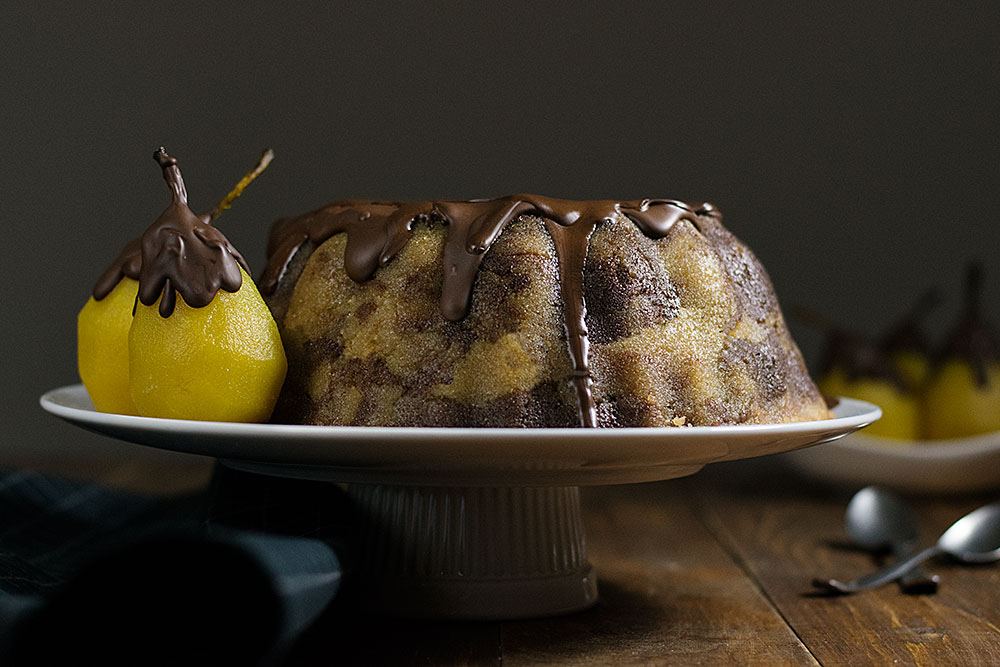 Some notes/tips:
Cook the semolina with the oil until brown and nutty.
Take the mixture off the heat before adding the warm syrup. It tends to bubble a lot!
Don’t overcook the pears! You want them a bit soft but not mushy!
Did you know that the best saffron is produced in Kozani, Greece from a little flower called krokos?
This cake will keep for more than 5 days at room temperature and more if stored in the fridge, due to the syrup and the lack of eggs and dairy. 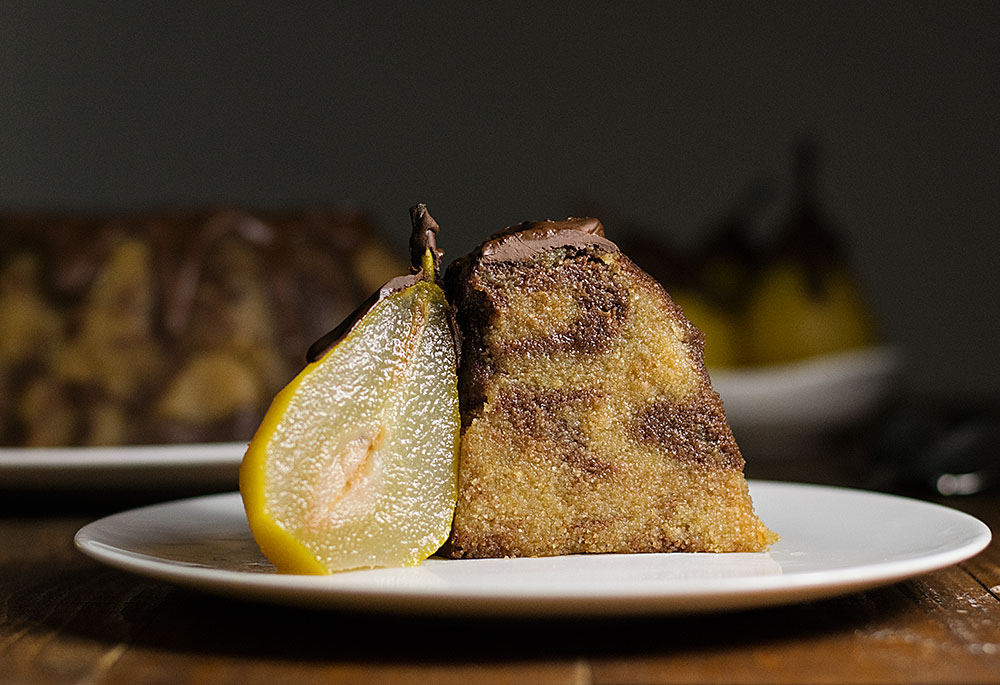 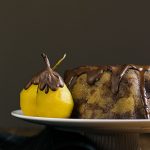 The olive oil ganache is a bit temperamental. It will seem very runny at first, but as it gets cold it can thicken very suddently. If you put it in the fridge to cool, check it very very often. If it hardens while being in the fridge, warm it in the microwaves, in 5 sec increments.