This is the easiest red sangria recipe and one of the best tasting! You’ll only need a bottle of wine, some fruit and a cinnamon stick for this traditional Spanish drink.

Red wine Sangria is one of the best Spanish wine drinks.

This alcoholic beverage was created in Spain over 2000 years ago out of necessity. People were trying to find ways to make cheap wine more tasty, so they started mixing it with spices, fruit juice and fruit chunks. And according to wikipedia only Spain and Portugal can label their product as Sangria.

Another explanation for the birth of Sangria, according to the article the history of Sangria from spanishsabores.com, is that when the Romans inhabited the Iberian Peninsula water wasn’t always safe to drink, so it was common practice to fortify it by adding some alcohol to kill off the bacteria.

That’s how this refreshing summer beverage was born. And I say summer beverage, because Sangria is widely regarded as a summer drink. However many people, myself included, enjoy it all year round, and so should you!

Sangria comes from the Spanish word “Sangre” which means blood, and as you’ve probably guessed, it refers to the deep red color of the drink. To make a delicious Sangria all you need is some fruit, a good wine and time (always let it sit in the fridge for at least a few hours!).

Everyone says not to buy an expensive wine for Sangria and I totally agree. You definitely don’t need an aged Bordeaux wine that can hurt your wallet. But you don’t want to buy the cheapest stuff either.

What you need is a young, fruity red wine, one you definitely enjoy drinking. And it kind of makes sense, because the wine is the basic ingredient. If you choose one you don’t like to drink on its own, then you won’t like your Sangria either.

The ingredients for red Sangria

What wine is good for red Sangria

Any light, young and fruity wine is a great option every time you want to make Sangria.

You don’t want a red that’s heavy on the tannins, because when tannins are cold they can be harsh and taste bitter. And you also don’t want a wine that’s too oaky (one that has been aged in an oak barrel for too long). Some suitable wine types are:

For more low tannin reds read this article from vinvm.com

And if you love wine and want to learn more about a special category which is the dessert wines, this post about the Mediterranean sweet wines has all the things you need to know.

Traditionaly no alcohol is used except the wine. If you want your sangria to pack more of a punch, you can add a quarter of a cup brandy per bottle of wine (60ml brandy per 750ml wine).

Usually brandy is added to recipes that require a lot of orange juice and soda. This recipe requires the juice from 1 orange and no soda or ice, so the alcohol of the wine is enough to make a light and refreshing drink.

What can I use instead of brandy in sangria?

If you like your sangria with a bit of a kick and you don’t have or don’t want to use brandy you can use some of the following:

The Best fruit for red sangria

There is no right or wrong as to what fruit to use in Sangria, but if you just need a little bit of inspiration some nice additions are:

Tips for the best Sangria 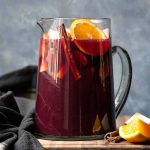