The white Russian is a cocktail made with vodka, Kahlua (coffee liqueur), and cream. It’s the cousin of the black Russian and it became famous after The Big Lebowski movie

According to the wikipedia the cocktails known as a White Russian and Black Russian first appeared in 1949. The Black Russian becomes a White Russian with the addition of cream. But don’t let the name fool you, this drink isn’t originated from Russia. It’s called this way because vodka is the main ingredient.

The White Russian became very popular after the 1998 release of the film The Big Lebowski. The protagonist of the movie, Jeffrey “The Dude” Lebowski, seems to be very fond of it. On a number of occasions he refers to the drink as a “Caucasian”.

Except from the Vodka, this drink contains Kahlua and cream. Full-fat milk cream (35% fat) works best in this recipe but you can also use milk or almond milk. If you want to make it vegan, almond milk is not enough because according to the Kahlua.com the way some of their suppliers produce sugar is not vegan friendly. So, make sure you use another coffee-flavored liqueur like Tia Maria.

My favorite way to enjoy a white Russian is with a mix of nuts and sultanas (golden raisins), with a piece of dark chocolate, with a slice of flour-less chocolate cake or with a square of olive oil brownie.

How to make a White Russian cocktail

This is a very easy drink to make. Normally you mix the vodka with the Kahlua in a glass, add the ice and stir well until chilled. Then pour in another glass with fresh ice and pour over the cream.

My usual, easier method is to add the vodka and the Kahlua straight into the serving glass, add enough ice and stir it well until chilled. Then, add the cream. You don’t have to shake this cocktail, a simple stir with a spoon will do.

Here is a list with 8 coffee liqueurs from liquor.com in case you want to broaden your options regarding which coffee liqueur to use.

How to make a vegan White Russian

To make a vegan white Russian you will need:

Who invented the White Russian cocktail?

According to vinepair.com the white Russian drink was conceived in 1949 when Gustave Tops, a Belgian barman, created the cocktail, along with its cousin cocktail, the black Russian – a White Russian without any cream – at the Hotel Metropole in Brussels in honor of Perle Mesta, then U.S. ambassador to Luxembourg.

How it became famous

The white Russian started to gain in popularity after The Big Lebowski movie. The main character (played by Jeff Bridges) was a rebellious, laid back ‘dude’ who was drinking this cocktail throughout the movie.

The Big Lebowski is a 1998 crime comedy film written, produced, and directed by Joel and Ethan Coen. The protagonist, Jeffrey “The Dude” Lebowski, is assaulted as a result of mistaken identity – a millionaire also named Jeffrey Lebowski was the intended victim. The millionaire Lebowski’s trophy wife is kidnapped, and he commissions The Dude to deliver the ransom to secure her release; the plan goes awry when the Dude’s friend Walter Sobchak schemes to keep the ransom money.

What about the glass?

The white Russian is served with ice in an Old Fashioned glass. The old fashioned glass, rocks glass, lowball glass (or simply lowball), is a short tumbler used for serving alcohol, neat or on the rocks. It is also normally used to serve the old fashioned cocktail, from which it receives its name. Old fashioned glasses usually contain 180–300 ml (6–10 US fl oz).

As mentioned previously, if you omit the cream you get a black Russian. But there is also a black Russian cocktail. So, for a black Russian you just have to mix add 1/4 cup vodka with 2 tablespoons Kahlua, then fill the glass with ice and stir until chilled. Garnish with a cherry on top.

For a black Russian cocktail add 1/4 cup vodka, 2 tablespoons Kahlua, and 6-7 ice cubes to a cocktail glass, then stir well until chilled. Top the glass with chilled cola and garnish with a Maraschino cherry. 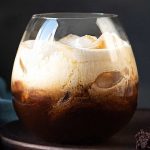