This homemade cinnamon rolls recipe uses olive oil for extra fluffiness and healthy fats and has the best icing made with melted, gooey white chocolate.

The best Cinnamon rolls are homemade!

These little gems are soft, moist, gooey, fluffy and sticky because of the olive oil and the white chocolate icing.

Yes, for me, this is the best icing because white chocolate pairs incredibly well with the brown sugar and the cinnamon in the filling making every bite an unforgettable experience. I’m not kidding guys! The white chocolate, brown sugar, and cinnamon combination is just heavenly!

That’s why you basically OWE IT to yourself to also save this baked white chocolate cheesecake recipe with mint and cinnamon. It’s a recipe you’ll find yourself making again and again.

Even before you start baking them, you’ll be amazed by the way they smell. And you won’t miss the butter, I promise!

Olive oil contributes some healthy mono-unsaturated fats and makes them soft, gooey, and very fluffy. Just make sure you don’t over-bake them if you want them to stay moist and gooey! For me, these are the best cinnamon rolls ever!

And since we’re talking about olive oil, I just can’t help myself but to mention these olive oil baklava fingers with lots on nuts, cinnamon and other spices, many extra crunchy layers of fyllo and some flavored syrup to bind it all together. Have you tried something like this? If not, you’re certainly in for a treat!

OK, I know what you think…

Lots of you are familiar with the classic cream cheese-based icing but put your doubts aside for a second, forget the cream cheese and just use some real white chocolate.

It will transform your icing into a gooey, luscious, deeply aromatic, creamy and sticky glaze that will make your cinnamon rolls equivalent to a decadent dessert, with the added bonus that you can also have them for breakfast, brunch, or as an afternoon snack.

White chocolate works very well with a bit of fruity olive oil, something you can also confirm by trying this salted white chocolate and olive oil magic shell, which is ideal not only for all of your ice creams but for many other desserts, as a white chocolate sauce.

Needless to say that the amount of icing given in the recipe is the minimum! You can increase it to your liking. I usually coat the cinnamon rolls entirely with the white chocolate icing, but this time I wanted the photos to show some of the rolls also, so I used it sparingly. 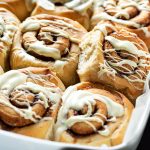 If you don’t have olive oil, you can substitute butter.